Preventing a Fire in your Home

How to Prevent a Fire in your Home - click here

Safety is No Game - Keep your Family Safe - click here 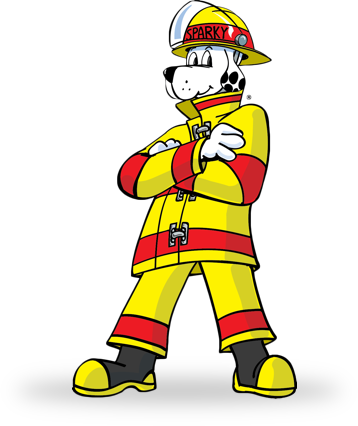 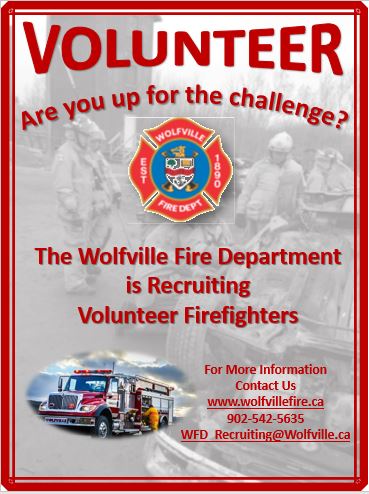 Serving as a volunteer in the Wolfville Fire Department is both a rewarding and challenging commitment. Membership involves attending weekly trainings on Monday evenings, responding to alarms, attending meetings and serving on various committees within the department.

If the applicant is voted in as a new member, they will be outfitted with bunker gear and a pager, and will begin their service with the department as a probationary member. While probationary members may begin attending alarms right away, their duties on alarms will be limited as they are still in the process of receiving their initial training; which often requires extra commitment in the early stages of membership.

During the first two years as a volunteer in the department, every member is required to complete the NFPA Fire Fighting Level 1 training course offered through the Kings County Firefighters’ Association and the Nova Scotia Firefighters School. In addition, every member of the department is provided with training in basic life support (CPR-C and Defib). If the member is interested in additional commitment, they may choose to take extra training and join one of the special teams within the department. In concert with several neighbouring fire departments in Kings County, the department has a Hazardous Materials Emergency Response Team and a High-Angle Rope Rescue Team which respond to special emergencies within the County. Although membership is a significant time commitment, serving as a volunteer in the Wolfville Fire Department is a rewarding experience for those who wish to give back to their community. “We never close."

(All applications must be delivered in person to the Wolfville Volunteer Fire Department, 355 Main Street, Wolfville.)

Enquiries? Contact Wolfville Fire Department Recruiting: This email address is being protected from spambots. You need JavaScript enabled to view it.

The Department responds to approximately 150-200 calls per year.
Are you prepared for an emergency?
Take time to review the Kings County Regional Emergency Guide

"To provide quality Fire Suppression, Fire Prevention, and Rescue Services to protect the lives and property of the Citizens of Wolfville and surrounding communities."

Do you have questions about becoming a Volunteer with the Wolfville Fire Department?

On October 14th, 1890, the Wolfville Fire and Protection Company, consisting of horse and hand drawn equipment, began serving the Town of Wolfville and surrounding communities from the building on Central Avenue that now houses Dr.'s Winslade and Pothier offices. The meetings of the Department were held on the third floor of the C.H. Porter and Sons building. Early in the 20th century, the Company moved part of its operations to the Main Street building that is now the Kipawo Arts Centre. In this location was housed the Department's first motorized apparatus, a 1923 LaFrance Pumper, which is currently still in working order and privately owned. The Department's first ladder truck was a Stewart purchased in the mid-1940's and was used to carry ground ladders.

In 1945, the Department surrendered its incorporated status to become an agency of the Town of Wolfville and was reorganized as the Wolfville Volunteer Fire Department.

In the early 1950's the Department moved to the new Civic Complex and a three bay station housing four units was built on the station's current location. The Public Works building is now used by the RCMP. The existing fire station was demolished to be replaced by a new larger station to provide space for eight units, administration, recreation and training which opened in 1971.

The first aerial device was an open cab 65 foot 1941 LaFrance purchased in the early 1970's, formerly in service with the Halifax Naval Dockyard, and ultimately fd43.jpgsold to the Springhill Fire Department. It was replaced by a 1967 100 foot LaFrance aerial on an International chassis which was sold to the Lawrencetown Fire Department in 1990 when the Department purchased a 1977 LTI 85 foot platform aerial from a dealer in Pennsylvania. The unit originally saw service in Florida. The Department is one of the founding members of the Western Nova Scotia Mutual Aid system, one of the most actively used mutual aid systems in Canada. As a result of membership, the Department has responded to major alarms throughout Kings County and beyond, travelling as far as the former Cornwallis Naval Base to assist in fighting the Nova Tire Recycling Plant Fire in 1999.

The major fire at the internationally recognized Tattingstone Inn in Wolfville in the early 1990's which was contained such that the building could be restored and reopened, resulted in the owner hosting a reception for the members and families of Wolfville and responding mutual aid Departments. Retired Chief Gerald Wood, fire chief at the time of the fire, noted that this sort of recognition is rare and was greatly appreciated by the members.

The Department celebrated its 100th anniversary in 1990 and at that time was presented with a plaque of recognition by the serving President of the International Association of Fire Chiefs-the only presentation of its type to a volunteer department in the history of the Association.

In the 1990's the response patterns of the Department changed significantly and the need for specialty services was recognized. As a result, a Hazardous-Materials response team was established in conjunction with the New Minas and Kentville Fire Departments. Subsequently High Angle Rope Rescue was added.

The apparatus of the Department presently consists of: